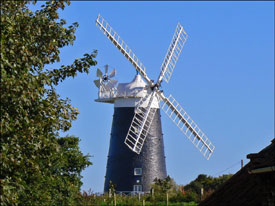 Windmills: the windmill grinding of corn was probably invented in Britain in the 1100s; Edmund Lees fantail of 1745 allowed windmills to turn into the wind automatically

Complex powered machinery: this appeared around 1280, seemingly first in Britain; water power was used to drive hammer systems, a vital step for textile and paper industries; water, wind and muscle were for long aeons the sources of power, until the harnessing, in Britain, of the power of steam 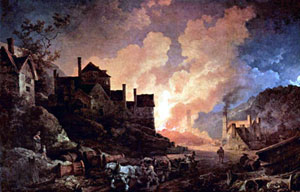 Industrial revolution: this began around 1750; the industrial revolution is one of the three greatest events in human history, the other two being the exodus of anatomically modern humans from Africa 50,000-60,000 years ago and the development of agriculture some 10,000 years ago; the industrial revolution happened in Britain because of expensive workers (the Black Death raised wages of scarce workers and trade, notably in wool, enabled wages to stay high) and inexpensive energy (Britain was lucky enough to have abundant coal), coupled with the native genius of a free people; the result was the worlds first wage (i.e. non-farm) economy; the factory system replaced cottage industries, with key developments in 1700s being mechanical spinning, the steam engine and smelting iron with coke (a pure form of coal); factory workers were the first new social class since knights in armour 1,000 years earlier; Britain became the worlds first urban society, with the 1851 census showing half the population in cities and towns; for the world as a whole this split was reached only in the early 21st century; industrialisation has changed for the better mankinds material circumstances, with commoners living as only royalty once did; there has been a corresponding revolution in health and lifespan, with many more children surviving into adulthood, through better sanitation, more control over epidemics, improved nutrition and higher living standards, and many more adults living into advanced old age

John Lombe: his silk mill at Derby in 1721 is reckoned the worlds first true factory

Cotton: the flying shuttle of John Kay, 1733; mechanical spinning machine of James Hargreaves, 1764, the Spinning Jenny; water-powered spinning frame of Richard Arkwright, for flax, 1769; Samuel Cromptons mule for fine yarns, 1770s; the mule was so-called because it was a hybrid of two different types of spinning machines  it used the stretching motion of the spinning jenny and the roller action of the water frame; these developments brought textile manufacture under one roof and started the factory system; Edmund Cartwrights steam-powered loom of 1785; steam power meant siting near fast-flowing rivers was no longer required; Manchester became the prototype modern industrial city, Cottonopolis; the mule spinning machines of Manchester were at the centre of a global industry, with cotton being processed thousands of miles from where it was grown; the peak year for production was 1913, when the British cotton industry was the largest and most efficient in the world; the First World War halted the trend to globalised trade in all goods and services, including textiles, and international commerce only reached its former level once more in the last quarter of the 20th century 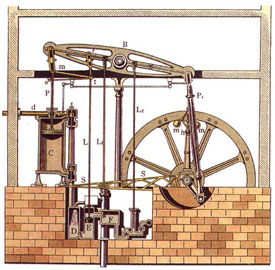 Steam engine: Thomas Saverys steam pump, 1698, to drain coal mines at a time when wood was running out, was the first condensation steam engine; he first used the term horse power; Savery appears to have built on the ideas of Edward Somerset (1601-67), 2nd Marquess of Worcester, who published a description in 1655 of his own steam engine for draining mines; in the mid-1850s Edward Somersets body was exhumed in what turned out to be a fruitless attempt to find the model steam engine the nobleman had requested be buried with him; Thomas Newcomens steam engine of 1712 did the same as Saverys, only better, with pistons; the year before clockmaker Christopher Holtum had demonstrated the world's first motor car and possibly this was steam powered [see First motor cars]; James Watt improved Newcomens steam engine with a separate condenser, 1765 (patent 1769), achieving a three-fold improvement in efficiency; Watt later invented the flyball governor, 1788 (the latter being an early form of automation); Watt is variously described as the perfecter of the steam engine or the inventor of the first efficient steam engine; with Matthew Boulton, Watt produced about 450 engines between 1775-1800, with 1500 Newcomen engines having been built over a longer period to 1800; Richard Trevithick built his first high-pressure engine at Dolcoath tin mine in Cornwall, 1799, ushering in a new era in steam engine development; the steam engine was crucial in the industrialisation of civilisation; Britain became the first industrial country; the steam engine, one of the most useful inventions of all time, was only displaced after nearly 200 years by the internal combustion engine and electric power [see below, Railway] 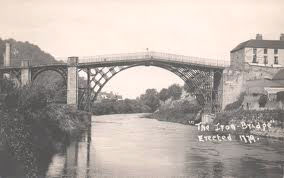 All-metal bridge: the first in the world was Ironbridge at Coalbrookdale, on the River Severn; it was erected in iron by Abraham Darby III in 1779 and still stands; the lettering on one of the outer arches reads, This bridge was cast at Coalbrooke-Dale and erected in the year MDCCLXXIX; the first iron aqueduct was at Longden upon Tern, Shropshire; it was designed by Thomas Telford and opened in 1796 [Source: Robertson/Shell]; the first iron railway bridge was Gauntless Viaduct, near West Aukland, County Durham, built by George Stephenson in 1824 for the Stockton & Darlington Railway [Source: Robertson/Shell]; the first permanent concrete bridge was erected in 1877 in Seaton in Devon [Source: Robertson/Shell]; Britain pioneered the remaking of the man-made world with iron & steel, as well as with glass, cement, plastics, rubber etc [see Materials]

Josiah Wedgewood: 1730-95; he industrialised the manufacture of pottery, becoming King of the Potteries; Wedgewood was the worlds first great industrialist; he was also an inspired hands-on potter and artist and an intrepid experimentalist; he was against slavery, making the worlds first campaign badge in support of emancipation [see Abolition of slavery]; his commercially gifted business partner was Thomas Bentley (1731-80); Wedgewood reckoned his greatest creation was the Portland Vase, still available to this day from the firm he founded; note that lead glazed pottery first appeared anywhere in the world in Britain (also France) around 1100

Jesse Ramsden: he produced the first truly modern precision screw-cutting lathe in 1777; this included leadscrew, slide rest and change gear mechanism; his screws had a claimed accuracy of four-thousandths of an inch; Ramsden was the first to use diamond-tipped cutting tools; he made some of finest astronomical, surveying and navigational instruments of the 18th century

Job & William Wyatt: worlds first screw factory, 1780s; this featured a pioneering use of multipurpose machines and embodied the guiding principle of industrialisation, that of shifting control of quality from the skilled artisan to the machine

Henry Maudsley: 1771-1831; his screw-cutting lathe, c. 1797, for cutting long screws, was an advance; his ultra-precise screw-cutting lathe of 1800, with leadscrew, slide rest and change gears, permitted industrial-scale production of perfectly threaded screws and bolts that were interchangeable; Maudslays precision lathe is regarded as the mother tool of the industrial age; it was eulogised by Karl Marx among others; Maudsley, a mechanical engineering genius, trained a dynasty of outstanding mechanical engineers including Joseph Clement (Babbages Difference Engine), Richard Roberts (metal planing machine, first successful gas meter etc), James Nasmyth (steam hammer, 1838, to solve the problem of making paddle shafts for Brunels SS Great Western) and, most famously, Joseph Whitworth (1803-1887); like Maudslay, Whitworth became a great manufacturer of machine tools and via exports of these Maudslays ultra-high standards of precision were disseminated worldwide; Whitworth produced in 1841 the worlds first standard for screw threadforms; he built himself a micrometer accurate to one-millionth of an inch; through Henry Maudslays own efforts and those of his protégés, Maudslays ideal of precision became his greatest legacy 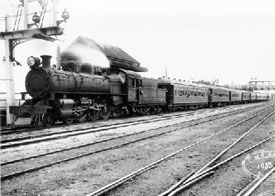 Railway: the invention of the mine railway in the modern era is attributed to Huntingdon Beaumont in 1604; iron rails replaced wooden ones at Coalbrookdale in 1767, with horse-drawn wagons being used; on 21 February 1804 the worlds first railway journey took place as a steam locomotive of Richard (Captain Dick) Trevithick hauled a train along the tramway of Penydarren ironworks, near Merthyr Tydfil in Wales; Trevithicks steam locomotive demonstrated the use of higher pressures than those attained by Watt, pulling 20 tons; the first commercial use of locomotives was by Mathew Murray and John Blenkinsop in 1812 at a colliery; the rolled iron rails of John Birkinshaw, 1820, were the key to reliable locomotive railways, as more resistant to shock loads than cast iron; George Stevenson (1781-1848), railway locomotive, 1814; his Locomotion Number One made the first run on the first public railway in the world, the Darlington to Stockton railway line, 1825, which Stevenson had laid; this inaugurated the Railway Age and a mobility revolution; Stevenson was the father of the railways; his Rocket, victorious at the 1829 Rainhill trials, achieving a record 30 mph, was the first modern locomotive; his vision was of (the worlds first) national railway system, which was duly built after the Liverpool and Manchester Railway became the first intercity line in 1830; the Stevenson Gauge of 4 feet 8½ inches is the worlds standard railway guage; Queen Victoria lent respectability to rail travel with her first journey in 1842, though for some time afterwards she did not allow her drivers to exceed 40 mph; the railway mania of the 1840s resulted in 6,000 miles of track by 1850; in the 21st century in Britain there are 11,000 miles of track; Mallard remains the fastest steam locomotive ever, reaching 126 mph, and is still steaming in the 21st century; steam locomotives are anthropomorphically captivating, with their push-rod arms pumping to and fro and Chuff chuff hyperventilation; steam locomotives were used in the worlds first underground railway, which ran from Paddington to Farringdon and became the Metropolitan Line, part of the London Underground (The Tube); in China, only in the mid-1980s did diesel and electric locomotive production finally overtake that of steam engines; the Shakuntala Express, which operates in a remote part of Maharashtra, India, was pulled by a steam engine from 1923 to 1994; it had been built in Manchester in 1921; we think of steam railways as a 19th century technology, but this British technology was vitally important for over half the 20th century as well; magnetic-levitation (maglev) trains were developed in Britain in the 1960s and are now in use in a number of places worldwide

Electric power: Michael Faraday (1791-1867), pioneering hero of the electric age, invented the electric motor in 1821 and the dynamo and transformer, both in 1831; the electromagnet was invented by William Sturgeon in 1823; the first power station anywhere to provide electricity for public use via hydroelectric power was at Godalming in Surrey in 1881; the first electric train was build by Robert Davidson in 1837 and used galvanic cells (i.e. batteries); the first electric railway was The City and South London Railway, 1890, which became part of the London Underground (The Tube); Volks Electric Railway, Brighton, was among the first such to be established in the world, the initial section being completed in 1883; it is the worlds oldest operating electric railway; Magnus Volk, its originator, also built in 1887 the world's first practical electric car [Source: Robertson/Shell]; a three-wheeler, it could travel at 9 mph; the first-ever electric car however had been demonstrated by another Briton, David Salomen, in 1874 [Source: Robertson/Shell; see First motor cars]