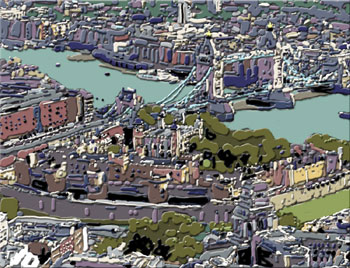 When a man is tired of London, he is tired  of life; for there is in London all that life can afford' (Dr Samuel Johnson, 1709-84)

'...London has become one of the most cosmopolitan and dynamic capital cities in the world.' [Source: Sykes]

Founding: London was not founded by the Romans, as is often asserted, but was founded much earlier, plausibly by Brutus the Trojan around 1100 BC [see Brutus]; its foundation as the national centre of the Early Britons over 3000 years ago makes it one of the worlds most enduring capitals; the image, right, shows the River Thames at Tower Bridge, with the Tower of London in the foreground

'Modern scholarship attributes its [London's] foundation to the Romans, but its traditional history goes back to at least a thousand years before the invasion of the legions, to the time of the legendary first king of Britain, Brutus the Trojan, who set up his capital in London and gave it its first known name, New Troy, latinized to Tri-Novantum. Thus on Caesar's second incursion into Britain, in 54 B.C., the people he found occupying London and the territory to the north were called the Tri-Novantes... The legendary burial place of King Brutus is the Bryn Gwyn or White Mound on which the Tower of London now stands. There also, in the fifth century B.C., was interred Molmutius, the twenty-first king in line, who built highways across the length and breadth of Britain and first codified the native British laws.' (John Michell, The Travellers Guide to Sacred England, 1996)

Size: London, the capital of the UK, was the first Western city in modern times to have one million inhabitants; it had reached that number by the late 1700s; by 1900 there were 6 million Londoners; in the 1930s London was the worlds biggest city, with well over 8 million inhabitants; at this time there were 11 cities with a population over 2 million and the total number of people on the planet was about 2 billion; by 2010 global population had more than trebled and there were over 100 cities in the world with greater than 2 million inhabitants; London is no longer in the top twenty of the worlds largest cities, with around 8 million people, but it remains Europes largest city

'The great central plain of England, with London in the south-east corner of it.' (Hendrik Willem van Loon, The Home of Mankind, 1933)

Thames: 210 miles of liquid history, which at Oxford becomes Isis, from Latin Thamesis; towards the seaward end was the site of the New Troy (later London) of King Brutus; the river was probably named by Brutus and his companions after River Thyamis in Epirus, Greece, which flows into the Ionian Sea, whence Brutus had just come, bringing his princess bride, Ignoge, daughter of King Parnassus [see Sources: Waddell]; in fact the city he had come from on the original Thyamis had itself been called Troy, according to Ovid and Virgil, by Helenus, fugitive son of King Priam of the original Troy; Brutuss great-grandfather Aeneas also himself founded a Troy, according to Livy, in the Tiber Valley, in what is now Italy; the original Troy was named after Tros, the founder of the city and ancestor of Aeneas and Brutus; after the Northern Hemispheres Medieval Warm Period, there was from AD 1350 for four hundred years a period called the Little Ice Age, when temperatures dropped an average of 2º Celsius in winter, permitting ice fairs on the Thames; Winston Churchill called the Thames the golden thread of our nations history

City of London Corporation: this is the municipal body governing the City of London, the Square Mile; dating from the fourteenth century, it is the oldest organisation of its kind in the world

Suburb: the modern suburb was invented in 1876, with the establishment of Bedford Park, in west London

Coffee houses: the first in London opened in the 1650s; by 1700 there were 500; there could be found the likes of Dryden, Addison, Steele, Pope and Swift; the coffee house shaped the very notion of public opinion; Charles II tried to ban them, as places of sedition; the London Stock Exchange was born in one, coming fully into being in 1773; being seen in the right establishment was essential; in the late 1600s it was Dicks or Wills for Whigs, the Devil tavern or Sams for Tories

Think tank: the worlds first was the Institute of Economic Affairs, London, founded in 1955

Trafalgar Square: this is the concourse of the nation; it features Nelsons Column, finished in 1842, honouring the greatest of the islands many naval heroes; Trafalgar Square is named for Nelson's greatest victory [see Trafalgar, 1805]; four statues of lions, by Edwin Landseer, were installed in 1868

'Trafalgar Square is the most famous public space in the country, and it is what we show the world when it visits. It is a meeting place, the town square of the capital, which also celebrates our past.' (Peter Whittle, Monarchy Matters, 2011)

Westminster: the seat of government; during his unsuccessful invasion of 54 BC, Julius Caesar had more troops available to him than the Spanish Armada; he fought a battle at the only ford across the Thames, the Isle of Thorns, now Westminster; according to legend, Julius Caesar founded the Tower of London

National Archives: the finest state archive in the world is in Kew, London

Metropolitan Police: this was the first police force in the world; the Met was established in 1829 by Home Secretary Robert Peel, the founder of modern policing; Victorian London became the first large city that was well policed [see Police force]

Railway capital: London, the capital of the nation that invented train travel, has more track miles than any other city on Earth, counting together overground and underground (the Tube) services; this status will not last beyond the second decade of the twenty-first century, with Asias rise, but it has lasted since near the start of the Railway Age, with the opening of Londons first overground service in 1836; the London Underground dates from the opening of the Metropolitan Line in 1863; this was the first underground railway anywhere; it ran beneath London for three-and-a-half miles from Paddington to Farringdon, using steam locomotives; the Tube was not only the first underground railway system but is the worlds oldest public transport system; it is 250 miles long and shifts over 3m people a day; by 2020 nearly 200 cities worldwide will have metros of the kind pioneered by London; the London Underground map of Henry Beck, 1933, has been emulated globally; Crossrail is a new 73-mile railway line under construction; it will run west-east across London, with a midtown section underground; in the second decade of the twenty-first century it is Europes grandest engineering project

M25: Londons orbital road was the longest such in the world when it was built

Great Stink: 1858; the Thames was an open sewer, overwhelming all nearby with the smell, including parliamentarians, at a time of rampant cholera; Joseph Bazelgette, 1819-91, designed and built an efficient sewerage system for London; it was one of marvels of 19th century engineering

Great Smog: 1952; 'smog' = smoke + fog: the Great Smog was a period of four days in December 1952 in which thousands died of bronchitis and pneumonia; the Clean Air Acts of 1956 designated Britains capital a Smokeless Zone; long before the Great Smog, dense fog in the capital was known as a 'London Particular'

Blue plaques: these commemorate eminent past residents regardless of nationality and were first put up in London in 1866; this idea has been emulated since by cities around the world

Wallace Collection: comprising decorative and fine art from the 1400s to the 1800s, this collection is the most valuable single gift ever made by an individual to any nation

Crown Jewels: the current collection are in the Tower of London; King John in 1216 famously lost an early set in The Wash [see John]

South Bank Centre: this is the worlds biggest cultural quarter

National Portrait Gallery: this is the largest collection of portraits in the world; the hardest thing to paint well is a face

Royal Opera House: in Covent Garden, this is the foremost opera house in Britain and one of the worlds greatest

Royal Albert Hall: there is a monster organ there, boasting 9,997 pipes; site annually of Britain's most stirring concert, the Last Night of the Proms

Big Ben: St Stephens Tower, Palace of Westminster, boasts the most famous clock in the world, but Big Ben is more precisely the name of its 13-ton bell, the chimes of which are from Handels Messiah; the bell was cast at the Whitechapel Bell Foundry; also cast there was the famous icon of the American Revolution, the Liberty Bell of Philadelphia; the Liberty Bell and Big Ben have another thing in common  they both have cracks

London Zoo: in Regent's Park, this, the worlds oldest scientific zoo, was founded in 1828, by the Zoological Society of London (ZSL); a key figure in the founding of ZSL in 1826 was Thomas Stamford Raffles, who had founded modern Singapore in 1819; by way of a royal precedent, Henry I (reigned 1100-35), fourth son of William the Conqueror, founded a zoo at Woodstock to study animals